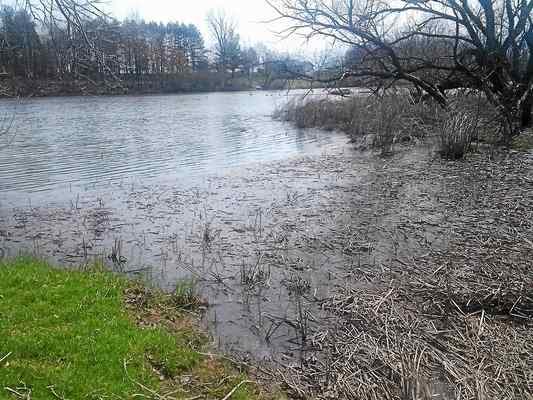 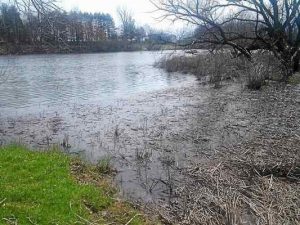 Jane Keon – special to the Sun Brown and green algae spreads near where the Honeyoey Creek empties into the Pine River in Alma on Tuesday, April 19, 2016.
By Morning Sun Staff
Posted: 03/04/18, 5:00 AM EST
An Alma College microbiologist will present findings of bacteria levels in the Pine River’s water and sediment and their resistance to antibiotics prescribed by doctors.
Tim Keeton, will present on his findings at the Healthy Pine River Task Force meeting at 7 p.m. on March 8 at the Alma Public Library at 500 E. Superior Street, according to a news release. The meeting is open to the public.
He will also explain his new study that can detect DNA down to the level of a picogram – a trillionth of a gram – using polymerase chain reaction technology.
The new study will distinguish between human and bovine DNA.
Advertisement
“Now that we know that antibiotic-resistant genes don’t get filtered out in water treatment plants, it’s even more important to clean the river water,” said Gary Rayburn, Chair of the Healthy Pine River citizens group.
Alma and St. Louis draw about 25 percent of their drinking water from the Pine River.
Chlorine treatment at the water treatment plant kills bacteria, but not the genes that carry antibiotic resistance.
Keeton’s new study will begin this spring and continue throughout the year.
Sampling and DNA analysis is also underway from a study last summer conducted by Michigan Department of Environmental Quality.
New sampling and DNA analysis will begin this spring by Streamside Ecological Services that is helping to complete a watershed management plan for the Upper Pine River.