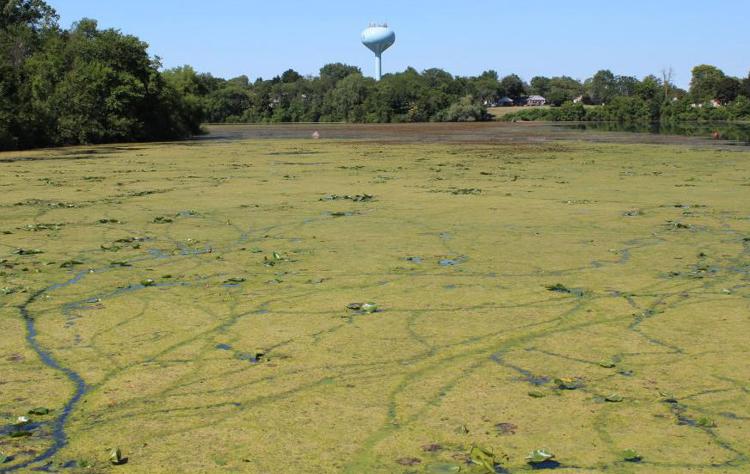 • By Linda Gittleman For the Morning Sun
• 5 hrs ago
• Comments 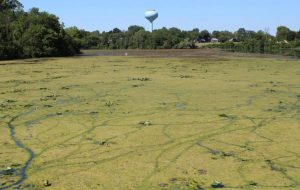 Pine River in St. Louis, overrun by algae. With each passing year the sediment load increases and more oxygen is required for the decomposition process. The yearly sediment dump renders the river more shallow as well as slowing the current. Warmer temperatures as we have been experiencing along with excessive nutrients are fuel out of control weed and algae growth.
Les Rosan
Manure produced by farm animals in Gratiot County equals the waste of 1.3 million people.
Gratiot has a population of 41, 018 according to the most recent census report.
So where does all that waste go?
It’s spread onto farmers’ fields, makes its way into ditches and streams and ultimately the Pine River, blooming with algae and other aquatic vegetation, which in turn chokes the river.
Alma College Environmental Professor Murray Borrello and his student, Junior Chelsea Faber however, may have found a way to help alleviate the problem.
They presented their findings at the Healthy Pine River meeting Thursday.
The basic research began with this question: How much manure from animals in a concentrated animal feeding operation (CAFO) is produced and how much manure or fertilizer is needed on crops?
What they found is that Gratiot farmers are over fertilizing their crops by 244 percent.
And Gratiot’s numbers pale in comparison to Allegan County, Borrello said.
Allegan’s farmers are putting nearly 500 percent more manure on their fields than needed.
Faber, a still active FFA member, used data established by the University of Iowa, Michigan State University, the U.S. Department of Agriculture and an organization called the Midwest Plan Service.
“This data wasn’t available five or seven years ago,” Borrello said.
Some of the data included such information as how much waste a lactating dairy cow, weighing over 1,000 pounds, would produce in just one day: the answer is 111 pounds per day, he said.
So what can be done about it?
Prevention may be one way.
Using one example, Borrello asked what if a farmer wanted to set up a pig or hog CAFO in Gratiot,
The numbers would be crunched and it could be determined that the area had too much manure already and the farmer had to find another location.
“Something has to be done,” he said.
After all, while the animal waste flows into the river and streams, so does the E.coli, which is a risk to human health, Borrello pointed out.
He acknowledged that the state would have to be in charge of regulating that kind of action.
But the state doesn’t appear to be as against such a preventive idea as it might have in the past, he said.
Borrello said he and Faber along with representatives from the Michigan Environmental Council, went to Lansing and addressed a group from EGLE (the former MDEQ now known as the Environment, Great Lakes and Energy Department) and members of the U.S. and Michigan Departments of Agriculture.
“They thought it was an interesting perspective,” he said, adding that they wanted more information.
And there’s a lot more information to gather, he said.
Borrello said it’s his opinion that different methods should be evaluated. As one example, Borrello asked, does the county need a waste water treatment system just for the animals?
He also noted by way of another example, that in Europe manure is used to make bricks.
There is no doubt however, that money plays a role.
“It’s cheaper to just dump it on the field,” he said.
Even so, its important to keep the conversation going, he said.
Borrello said he thanked the Healthy Pine River group as well as the cities of St. Louis and Alma with their funding for the research.
Because of their help, the Pine River watershed is the best studied river in the state.
Faber’s findings will likely be published in a technical journal, he said.
Other Michigan counties that are over fertilizing include Tuscola at 98 percent more than needed, Clare at 184 percent, and Ogemaw at 231 percent.