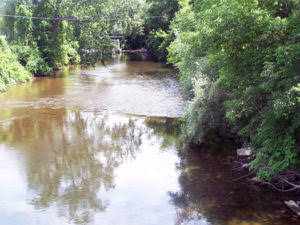 The U.S. Environmental Protection Agency has enlisted the services of Michigan State University wildlife toxicologist Dr. Matt Zwiernik to conduct a multi-year study on the Pine River downstream of the municipal dam in St. Louis to determine if there arehealth risks associated with toxic substances from the former Velsicol Chemical Co. plant in that portion of the river. (Herald photo – Nelson)

by Greg NelsonHerald EditorA multi-year study of the Pine River downstream from the St. Louis municipal dam has started.The U.S. Environmental Protection Agency has enlisted the services of wildlife toxicologist Dr. Matt Zwiernik from the Michigan State University Wildlife Toxicology Laboratory to conduct the study.Zwiernik has assisted the Pine River Superfund Citizens Task Force the past several years conducting studies on dead birds found in the community. He’s also conducted previous tests on the downstream portion of the river while working on the dioxin problem in the Tittabawasee River near Midland.The new study will determine if there is any risk associated with toxic substances from the former Velsicol Chemical Co. plant site in that section of the river.Both the EPA and Michigan Department of Environmental Quality have conducted previous downstream investigations from St. Louis to where the Pine meets the Chippewa River near the Chippewa Nature Center in Midland County.Zwiernik will look for “contaminants of concern,” or COC’s.The point of the investigation is to collect enough data to calculate the risk that the COC’s in the river sediment and soil have on various forms of wildlife, including tyroid problems and poor breeding success.Homeowners from the dam to North County Line Road have given Zwiernik access to their property.He has already installed 110 bird boxes for song birds in that area that will help measure individual and population health.Samples will be analyzed with a new “ToxCast” procedure, which incorporates a series of molecular and biological assays, Task Force Secretary Jane Keon said.It will be the first time that it has been used in an ecological risk assessment, she added.“Most contaminated sites only have one or two chemicals of concern, but with a site containing so many COC’s the ToxCast will speed up the lab process and give information on the interaction of the COC’s on wildlife,” Keon explained.The direct measuring Zwiernik and his students will do in the wild, such as nesting success, clutch size, nest attentiveness and fledgling success, will relate directly to assessment endpoints.Previous sampling by the MDEQ in that section of the river showed that the sediment was contaminated with various toxic substances including PBB, DDT and PAH.Because of those tests the EPA agreed to do an additional study.Initial tests were done between 2002 and 2004, with follow-up sampling taking place in 2010 to 2012.Samples were taken from the sediment, floodplain soils, surface water, fish, birds, mammals and “benthic” invertebrates such as crayfish.They were tested for more than 100 chemicals with DDT being the most prevalent compound found. The screening level was 5 parts per million.One of those was polycyclic aromatic hydrocarbons, PAH’s, which comes from oil refining.Task force members want to know how far downstream the contaminants have traveled.The EPA also conducted a study of fish in that portion of the river in 2014.Although the fish are still not fit to eat, and the Michigan Department of Community Health’s ban on the consumption of fish caught in that area established in the late 1970s is still in place, things appear to be getting better.The $100 million cleanup of the Pine River adjacent to the former Velsicol Chemical Co. plant site in St. Louis, that took place from 1999 to 2006, is credited with improvement.Work done by the EPA and MDEQ has helped reduce the amount of DDT in common carp downstream from the cleanup has decreased 98 percent, the report stated.It also cautions that “the cleanup is not complete and fish continue to have some contamination.”Concentrations of hexabromobiphenyl (HBB), which is part of the PBB group, were also found.However, not much is know about the substance.Zwiernik’s study is scheduled to last at least two years but funding is only assured for the first.At that time an assessment will take place and adjustments made if necessary.Zwiernik’s entire work plan for the study can be found on the EPA’s website at https://semspub.epa.gov/work/o5/927432.pdf.