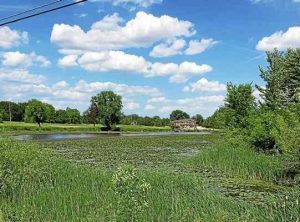 Linda Gittleman – Morning Sun -The Pine River at the Luce Road Bridge in Alma appears to continue to shrink as algae overtakes it.
By Linda Gittleman, The Morning Sun
Posted: 06/06/17, 12:01 AM EDT | Updated: 2 hrs ago
11 Comments
Sooner than expected, the Michigan Department of Environmental Quality will begin monitoring the Pine and Chippewa rivers this summer.
They will study oxidation, nutrients and algae levels as well as E.coli at some locations.
Employees will be able to determine if the material is human or bovine, said Jane Keon, a member of the Healthy Pine River group as well as the Pine River superfund Task Force. According to the U.S. Department of Agriculture, Gratiot County has more cows than people. Gratiot has a population of less than 42,000 but it’s cows number more than 47,000.
It also has more than 60,000 pigs.
The MDEQ, however won’t be testing for any materials that may come from swine, Keon said.
The agency though, is responding to the 60 requests sent out by members of the Healthy Pine River group.
The big question among all concerned in the county is what is going to happen after the tests are completed.
What if the state determines, as Alma College Professor Murray Borrello has stated after numerous tests completed by the college, that, “The river is choking.”?
What then?
No one knows the answer to that as the state legislature would have to take some action.
Gary Rayburn, leader of the HPR group, however, said he is grateful that the state is conducting its own tests and, he said he understands that the state will share the information with the community.
Meanwhile though, the Pine River continues to get worse, he said.
“I’d say it’s about 10 to 15 percent worse (than last year at the same time),” he said.
The Pine’s contamination is a human health concern and the state agencies have to play a role in making sure the manure and other contaminants from the big farms don’t end up in the river, Borrello said.
He said he had two reports this spring from witnesses who saw trucks dumping manure into the river. Some farms hire companies to remove the waste with no expectation that it will be deposited in the river, he said.
But by the time the state employees respond to a report of a violation, it may be two days later, making it more or less impossible to track the violators, Borrello said.
He added too, that if someone makes too many reports of violations, that person can be fined.
Rules and regulations have to be changed for the rivers in the state to become healthy again.
If as a few believe, the contamination is coming from humans’ septic systems, then why doesn’t the state, like Wisconsin, test those systems, asked Alma City Manager Phil Moore.
The information however, gathered by the college indicates the major cause of the problem is coming from animal and not human waste, Borrello has stated.
And in order to fix it, “the state had to own up that we have a problem,” Moore said. “It’s not just the Pine.”
Moore said he’s glad the state is testing, noting that information is critical for remediation.
But make no mistake, he said.
“We do have a problem.”
The Chippewa Watershed Conservancy spokeswoman Katie Randall said they had heard testing on the Chippewa would be conducted but she hadn’t heard directly from the state and does not know where the monitoring will take place.
She suggested the Chippewa Tribe’s water department would know more, but there was no response for a request for more information.
The state also did not respond to requests for more information.