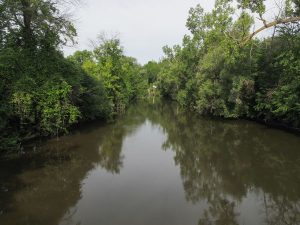 Column: Fishing for facts in troubled waters
·         By Les Rosan, Morning Sun Guest Columnist
Since April 22, I have engaged in a project to document visual changes to the Pine River in portions of Gratiot County. As the task unfolded I watched in frustration as the river’s appearance, health and usability continued to rapidly degrade. Working through my frustration I took hundreds of photographs to vividly illustrate the demonstrative changes that transpired over the course of just several months.
After voicing my concerns to Alma city officials a meeting was arranged with Dr. Marcus Cheatham of the Mid-Michigan District Health Department. Subsequent to the meeting Dr. Cheatham prepared a response which was posted to the city’s website. His missive was presented in a question and answer format which focused almost exclusively on human sewage contamination of the Pine River and the potential impact upon human health.
With this narrow focus, Dr. Cheatham glossed over a very important issue. The fact is that the U.S. Environmental Protection Agency has determined that non- point source agricultural runoff rather than failing or non-existent septic systems, is the number one cause of water pollution in rivers and streams in this county. www.epa.gov/nps/nonpoint-source-agrigulture
Locally, Dr. Tim Keeton and Murray Borrello, faculty members at Alma College, have been studying and sampling the Pine River for over fifteen years. Their opinion on the river is well known and was reaffirmed in a fact sheet they distributed at a recent meeting.
“We are confident that agricultural runoff, mostly from manure application and livestock facilities are the main source of the algal blooms and bacteria we find in the Pine River. However, we need to make sure that leaking septic systems aren’t playing a role as well. Timing of when the Pine River began to experience algal blooms is correlated with the increase in large livestock facilities (called CAFOS) and heavy manure application in the county.”
In his piece, Dr. Cheatham explained three reasons why human e coli in river and lakes are important but he did not explain why animal e coli might be harmful as well. Even though he mentioned a strain of lethal e coli in his opening paragraph he did not name or explain its origin. E. coli 0157H7 was discovered in 1982 and is a strain of bacteria existing primarily in the gut of livestock cattle. In a human host, 0157H7 can produce a poison known as a Shiga toxin, which is named after Kiyoshi Shiga, the Japanese researcher who discovered it. The toxin can cause kidney failure in susceptible individuals and is described as one of the most potent bacterial toxins known. 0157H7 was in the news this spring when 200 people became sick from romaine lettuce grown in Arizona. One hundred who became ill were hospitalized and five of them died. The source of infection was traced back to an irrigation canal contaminated with this lethal strain of waterborne e coli bacteria. This was the country’s largest e coli outbreak in more than a decade.
Just over a year ago I interviewed Dr. Amanda Harwood at Alma College in preparation for a Morning Sun column. Dr. Harwood was the supervising faculty member of a fish study conducted of the Pine River in 2017. Dr. Harwood and her students went fishing on July 21 and Aug. 2, 2017. There had been no rain events for several days prior to the fishing trips but testing on each occasion revealed e coli bacteria present on the fish and on the hands of the involved students. Dr. Cheatham’s carefully worded piece appears to suggest that the river is safe for human contact 48 hours after a rain event. Dr. Harwood’s study would suggest otherwise. During the interview when I mentioned the O157H7 bacteria she told me that she had no reason to believe it would not be present in the Pine River. She also said she would not have any contact with the river unless she was wearing protective equipment and had direct access to bleach disinfectant.
Dr. Cheatham’s piece was remiss by not mentioning that Alma College researchers have discovered antibiotic-resistant bacteria in the Pine River. Lab testing revealed that antibiotic-resistant bacteria taken from the Pine River could not be killed with doses of tetracycline at many times the therapeutic levels. In this country, anywhere between 50% to 80% of the medical grade antibiotics sold are fed to animals.
Dr. Cheatham did mention that several times each summer e coli levels in the Pine River were at such a level as to render the water as unsafe for absolutely any human contact. The highest levels consistently occur at the confluence of Honeoye Creek and the Pine River in Arcada Township, and at the popular city-owned boat launch.
Dr. Cheatham’s effort is a step forward towards the goal of educating and protecting the public but it should not be perceived or accepted as an ending point. There is still a great amount of work to be done and we must remain vigilant rather than complacent to achieve long-term positive results.
“I can’t say that the Pine River is deadly dangerous every day, but it is on certain days.” ( Dr.Tim Keaton, Alma College biologist)

Pine River to get more testing, studies this summer